We interrupt this blog… 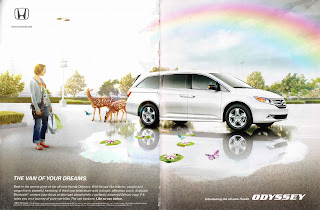 Yes, that is an advertisement.  I’m actually going to ask you to have a close look at it.  Clicking on it should give you the full-size image.
I should begin by saying that I am not associated in any way with Honda, I do not endorse Honda or its Odyssey, and I was not paid to publish that advertisement - it’s actually the subject of my assignment for this week.  I scanned that image from a magazine, and I have reproduced it here for the purpose of review (given that I just posted their ad here for free, I think they can hardly complain).

Go ahead and click on it, and check out the full-size ad.  Look at it for about ten seconds.  When the ten seconds are up, close the image and think for a moment about what it was trying to tell you.  Then come back to this post.  I'll wait right here.