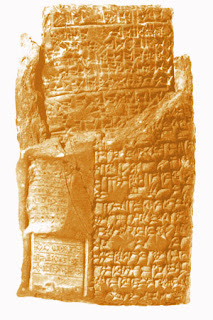 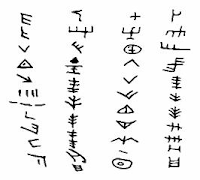 The earliest known systems of writing were developed about seven or eight thousand years ago.  They may have begun as pictographic or abstract symbols to express simple ideas; it was not until less than four thousand years ago that the first true alphabets - mapping individual symbols to specific phonetic sounds - emerged.
A little over two thousand years ago, artists in China began using wood blocks to print images onto silk.  A little over five hundred years ago, Johannes Gutenberg revolutionized printing with the invention of movable type, enabling mass production of the Bible, scientific texts, and newspapers.  Scientists could now share discoveries with their peers much more easily, helping to spark the scientific revolution of the 16th through 18th centuries.
The first seed of the Internet was the ARPANET connection established in 1969.  HTML, now the universal language of the Internet, was developed in 1992.  The following years brought Yahoo!, Amazon, eBay, and the first weblogs - abbreviated to "blog" starting in 1997.  The Google search engine was launched in 1998.  Blogger, the service by which you are reading this now, was launched in 1999.  The last ten years have brought Wikipedia, MySpace, iTunes, Skype, Flickr, MMORPGs, Facebook, podcasts, YouTube, Twitter, WikiLeaks, Tumblr, Kindle, and much more.  It's really amazing how quickly communication technology has advanced over the last forty years.
Forty years.  40 years.
Writing is no longer restricted to recording primitive concepts, nor is it an art reserved for scribes.  If you are reading this blog, you probably write almost every day.  Whether it's an e-mail, a Tweet, a YouTube comment, a text message, an instant message, or a blog post, writing has become ubiquitous in our society.  Writing has become a standard form of communication.  According to CTIA - The Wireless Association, more than 1.8 trillion text messages are sent each year in the United States alone.  That's 1,800,000,000,000 text messages, and every one of them is written.  We may not be William Shakespeare or Robert Frost, but we are writers nonetheless.
It took millennia to get from the earliest proto-writing to the earliest concepts of electronic mail.  Now, just forty years after that, we are a civilization of writers.  As such, writing is more important now than ever before.  Roughly 2 out of 3 Americans use text messaging to communicate.  These and others make use of Facebook and Twitter to share their lives with friends and the world.  Wikipedia is an enormous encyclopedia with more than 3,500,000 articles in English, made available for free, instantaneously, to anyone in the world with an Internet connection - a far cry from Gutenberg's press, which could print up to 240 pages in one hour - and Wikipedia is written collectively, and updated continuously, by more than 14,000,000 registered members.  And with this post, I join over 156,000,000 public blogs on the Web today.
As I see it, there are now four main kinds of writing:
The first kind is probably the most pervasive in everyday life.  E-mail has almost completely replaced "snail mail," and text messaging is gradually catching up in popularity to actual phone conversation.

The second kind, including Facebook and Twitter, has made possible a whole new kind of communication never before imagined.  A single person can, without difficulty, say whatever they want to the entire world.  Granted, the entire world may not be listening, but if a person has something interesting, or funny, to say, that person can be heard by a lot of people.  Those people then will often turn to writing of the first kind, sending e-mails to friends with links to the original writing.  Some of those people may give direct feedback to the original author by writing comments - which will, in turn, be published for the world to see.

Many professions require a great deal of writing, and someone who is able to communicate well through writing is more likely to succeed in many careers than those who are not.
As for the fourth kind: it may not be immediately obvious how modern technology has affected books and periodicals, but then one thinks of e-books and Kindle, and how an avid reader may hold an entire library of volumes in the palm of one hand.  For those who prefer "dead tree" books, online sellers such as Amazon and eBay offer easy access to even the most obscure texts, which nobody would even have heard of otherwise.  Self-publishing sites such as Lulu.com offer inexpensive or even free publishing services for independent or undiscovered authors, which means that anyone, including you, can now get a book published and start selling it.  Of course, you would have to write it first.
So we see that writing is not simply important: in our information society, it is indispensable.  It is very nearly omnipresent - and those with good writing skills have greater opportunity than ever to make themselves heard.